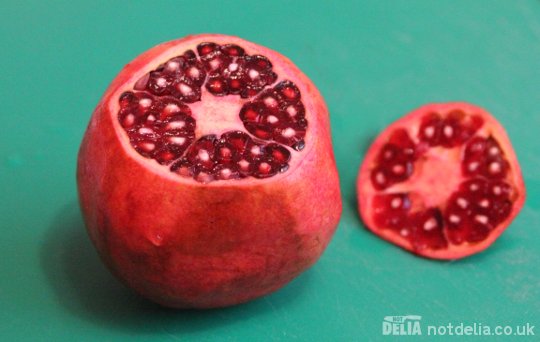 Pomegranates originate from Persia, but are now mainly grown in Spain, the Middle East, and America.  They’re round, about the size of an apple, with a hard, shiny, red skin, which is inedible. Inside the fruit you’ll find countless little edible seeds, each of which is contained in a jewel-like sac of sweet juice. The sacs are packaged in a bitter, inedible pith so to prepare the pomegranate you’ll need to get rid of the pith.

Pomegranate is mostly used in salads, especially in the Middle East, or as a garnish to decorate meat dishes. Alternatively, you could eat it straight from the shell using a cocktail stick to extract the juice sacs. It’s considered by some to be a ‘superfood’ as it’s highly nutritious.

Not Delia: How to prepare a pomegranate